New trends from the West, old traditions from the home country

A little story about a wedding party photo session that I happened upon a few years ago in a middle class Beijing hotel:

I had left my room to go to my Chinese class as I saw a wedding party having pictures taken in front of the hotel. Nothing special about that. But when they saw me, the only “long nose with yellow hair” far and wide, the groom literally grabbed me and I was made to a “guest of honor” not really understanding what was happening with me.

The young couple were farmers from a little village not far from the capital. They and their families had been saving a long time to make this wedding party possible. Having it in a Beijing hotel was grand, having a “foreign guest” made it obviously even grander. Much of it was obviously about gaining face.

After so many pictures had been taken of the couple with me, parents and parents-in-law with me, all the other guests with me, and I had been given three bags of wedding candy I was finally able to excuse myself and go to my class.

Unfortunately I didn’t have my own camera nor smart phone ready so I have no pictures from this occation.

The following two stories are examples of two extreme ways of celebrating marriage in today’s China.

The first story is based on an article from the Guardian, April 2011. (https://www.theguardian.com/lifeandstyle/gallery/2011/apr/27/chinese)

It was a wedding fit for a British princess, but by the increasingly elaborate standards of the Chinese elite it looked almost modest.

The parade involved 50 people, a dozen cars and two horses. It was led by four women wearing white dresses and floral wreaths on their heads carrying a square banner in red, white and blue with the couple’s names printed on it.

The couple waved regally from their horse-drawn carriage as they rode through the eastern city in a procession costing 50,000 yuan (£4,600). Lavish wedding celebrations are becoming increasingly popular in China and the industry is said to be growing by as much as 20% a year.

While the legal procedures are a bargain – it costs less than a pound to register a marriage – banquets can include hundreds of guests. A growing number of wealthy couples have added ceremonies, which can mix western or old-fashioned Chinese rituals with a dash of the unexpected – such as Mickey Mouse appearing to help with proceedings.

Wedding planner Hu Lu, who arranged the procession, said the “royal carriage” theme was increasingly popular and three more couples had already booked it for next month. “Every bride wants to be princess Snow White when they get married,” she said.

Another wedding held the same year, reportedly for the daughter of a coal mining boss in Shanxi province, was said to have cost 6m yuan. Photographs circulated on the internet showed a procession composed of Rolls-Royces, Ferraris, and Mercedes cars with several cameramen filming from Jeeps.

In response to social and cultural problems two intellectuals in China have offered different versions of wedding rituals based on the Confucian Classics in order to restore ritual as a powerful tool for individual, family, social and national renewal.

Zhang Xianglong 張祥龍, a philosophy professor at Peking University in Beijing, orchestrated a more antique Confucian wedding for his son in Beijing in 2010.

Both Zhu and Zhang aimed at giving new life to classical rites and leading participants to reconnect to traditional aesthetics and values. Zhu Jieren asserts that a wedding is an affair of the parents, the extended family, the society, and ultimately the whole country. In his view, weddings teach people that they have a responsibility, not only to their own parents, but also to the larger family, the entire society and to Nature.

Ultimately, Zhu Jieren does not only want to campaign against the “spiritual pollution” of “Western ills,” but he wants even more to reconnect younger generations with their ancestors and their society through hierarchical respect.

This is my favorite wedding picture (2012) . It shows my best Chinese friend Xiao Yan with her husband Lu surrounded by her family and their friends in her hometown about 400 km SW of Beijing.

The same couple enjoyed later a relaxed and uncomplicated wedding dinner party in a Beijing restaurant with working colleagues and friends including the above mentioned “yellow-haired long nose”. 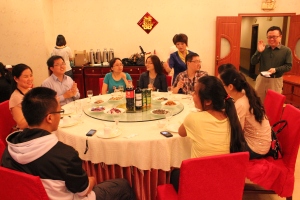